What Is a Kubernetes Cluster, and What Are Kubernetes Master Nodes, API Servers, Roles, and RoleBinding? - Portworx Skip to Content

What Is a Kubernetes Cluster, and What Are Kubernetes Master Nodes, API Servers, Roles, and RoleBinding? 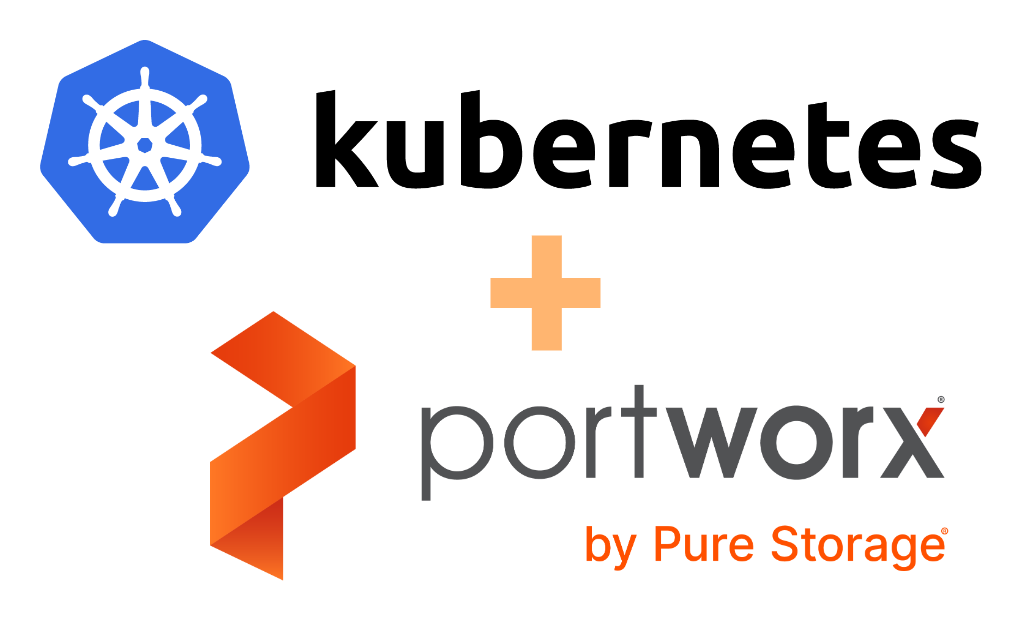 Kubernetes, also known as K8s, is an open-source container orchestration platform that runs as a cluster of worker and master nodes, allowing teams to deploy, manage, and scale their stateless and stateful applications. Google initially used an orchestration platform internally for their mission-critical applications called Borg. A decade later, they released an open-source version of Borg and called it Kubernetes. The name “Kubernetes” originates from the Greek word for “Helmsman.” Kubernetes, now managed by the Cloud Native Computing Foundation, is one of the top open-source projects, with active development and contribution from large organizations like Google, Red Hat, VMware, Microsoft, and others.

Kubernetes provides a uniform orchestration platform that unlocks application mobility and portability. Developers can take their application code and run it against any conformant Kubernetes cluster on-premises (enterprise’s datacenter) or in any public cloud.

What Is a Container?

Even with the explanation above, it may be hard to understand what containers and Kubernetes are all about. For a better understanding of containers, we will begin with a little history on how application deployment methods evolved.

Traditional Deployment: Early on, when compute resources such as CPU and memory were not as powerful as today, applications were directly installed on the servers and operating systems. If multiple applications run on the same server, the binaries and libraries are often shared with each other. The resource sharing was difficult if one of the applications was a resource hog—using either high CPU, memory, network, or disk I/O—the other applications would suffer performance degradation. Often, the solution to this was to deploy a single application into a dedicated physical server, but this also leads to the problem of server resource underutilization.

Virtualized Deployment: The virtual machine (VM) was introduced as a solution. With the help of hypervisors—such as VMware, RedHat KVM, or Microsoft Hyper-V—we can run multiple VMs on a single physical server.  Each VM is a full machine running independently, including its own operating system, on top of the virtualized hardware. This allows applications to be isolated between VMs and provides a level of security, as the information and data in a VM cannot be accessed by other VMs.

Virtualization also leads to much better server resource utilization as you can easily size or set the resource limit to the VMs. VMs can be easily scaled by cloning VMs and moving them around to other servers/hosts.

Containerized Deployment and Containers on VMs: Containers are similar to VMs, but they have relaxed isolation properties to share the Operating System (OS) among the applications. Therefore, containers are considered lightweight. Similar to a VM, a container has its own filesystem, share of CPU, memory, process space, and more. As they are decoupled from the underlying infrastructure, they are portable across clouds and OS distributions. In Kubernetes, the smallest deployable application unit is called a pod. A pod contains one or multiple containers. In this article, we use the terms “pod” and “container” interchangeably.

There are many benefits to using containers, but here are some of the main advantages:

How Are Containers Used?

Now that we understand containers are lightweight and agile, we can move ahead and see where containers are used today. To illustrate, we will look at a fictional tech company called “Orange Device, Inc.”

Orange Device, Inc. is releasing a new smartphone, and a massive number of customers are going to order a new phone online on the release day. This means the company’s online phone ordering system will need to process a huge spike of transactions during the first few days of phone release. Let’s see how containers and Kubernetes can help resolve this challenge. 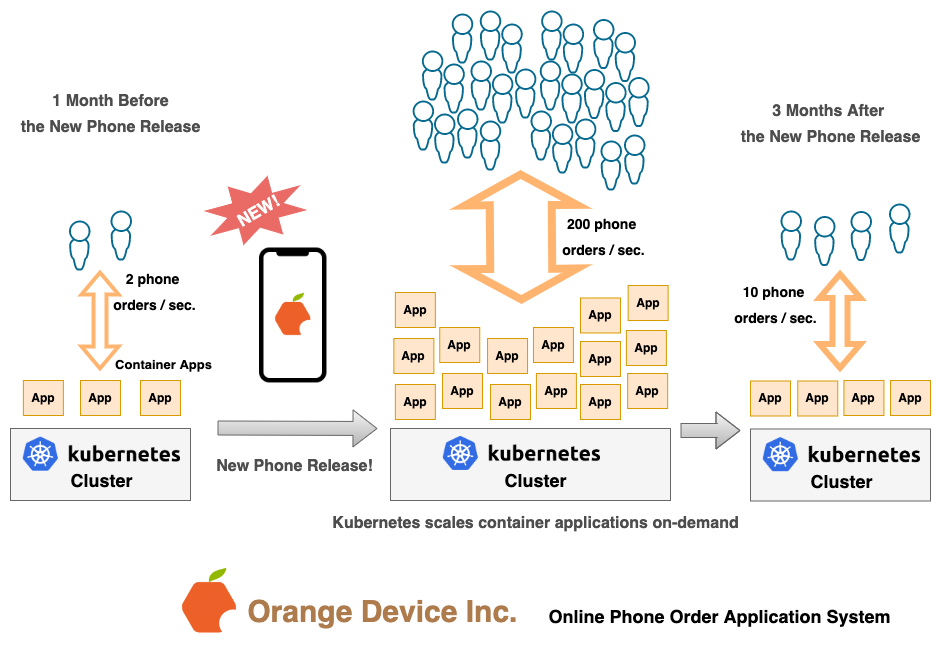 So, as a container orchestration platform, Kubernetes automates a lot of the manual processes involved in managing, deploying, and scaling containerized apps. The example shown above is just one popular use case of containers and the Kubernetes cluster.

What Is the Difference Between Master Nodes vs Worker Nodes?

A cluster resembles a group of nodes or servers that work together to distribute the workload. It also provides high availability in case of a node failure.

A Kubernetes cluster consists of at least one master node and one worker node. This configuration is usually for dev, testing, and learning purposes. A production cluster is made up of at least three master nodes and multiple worker nodes. More information regarding the number of nodes can be found here. 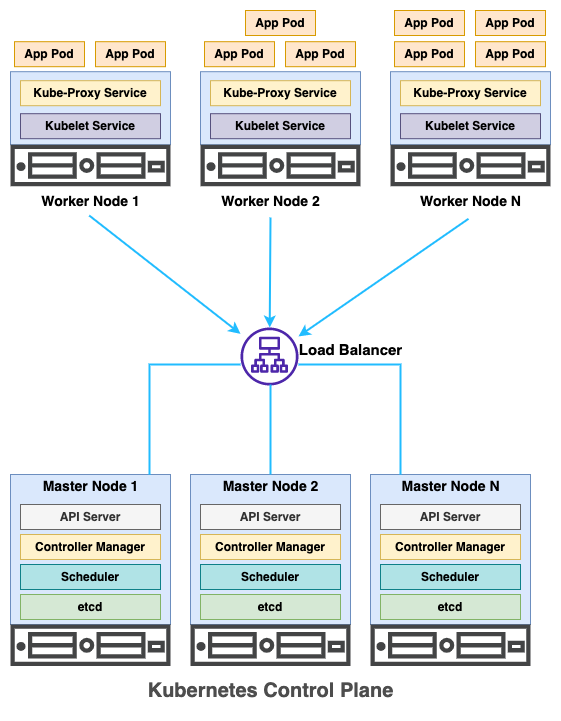 The worker nodes are actually running application pods (sometimes called workload) in the cluster. They have following two components:

What Is the Difference Between Stateless vs Stateful?

At the high level, there are two types of applications or containers in Kubernetes.

What Are Kubernetes Objects and YAML Files?

Kubernetes objects are persistent entities in the Kubernetes system. Kubernetes uses these entities to represent the state of your cluster. Specifically, they can describe:

YAML stands for “yet another markup language.” It is a text format used to specify data related to configuration. Any Kubernetes objects can be described as YAML files.

In short, Portworx is the container-native storage for stateful applications.

Kubernetes provides automation for application deployments by scheduling pods dynamically on worker nodes. This works very well for stateless applications. However, managing stateful applications is more complex because they have persistent volumes attached to them. In many cases, these persistent volumes come from the shared storage array—such as Pure Storage FA—and are attached to the nodes. Due to this persistent nature, dynamically moving stateful pods is difficult for Kubernetes.

So, what happens in case of a node failure that runs stateful pods? How do we migrate stateful pods in between nodes or even in between clusters? Since stateful pods often run database applications, we need to protect this data as well. How do we back up these persistent volumes so they can be easily restored? Portworx delivers the answers to these questions, helping users handle the complexities of storage management in the world of Kubernetes. 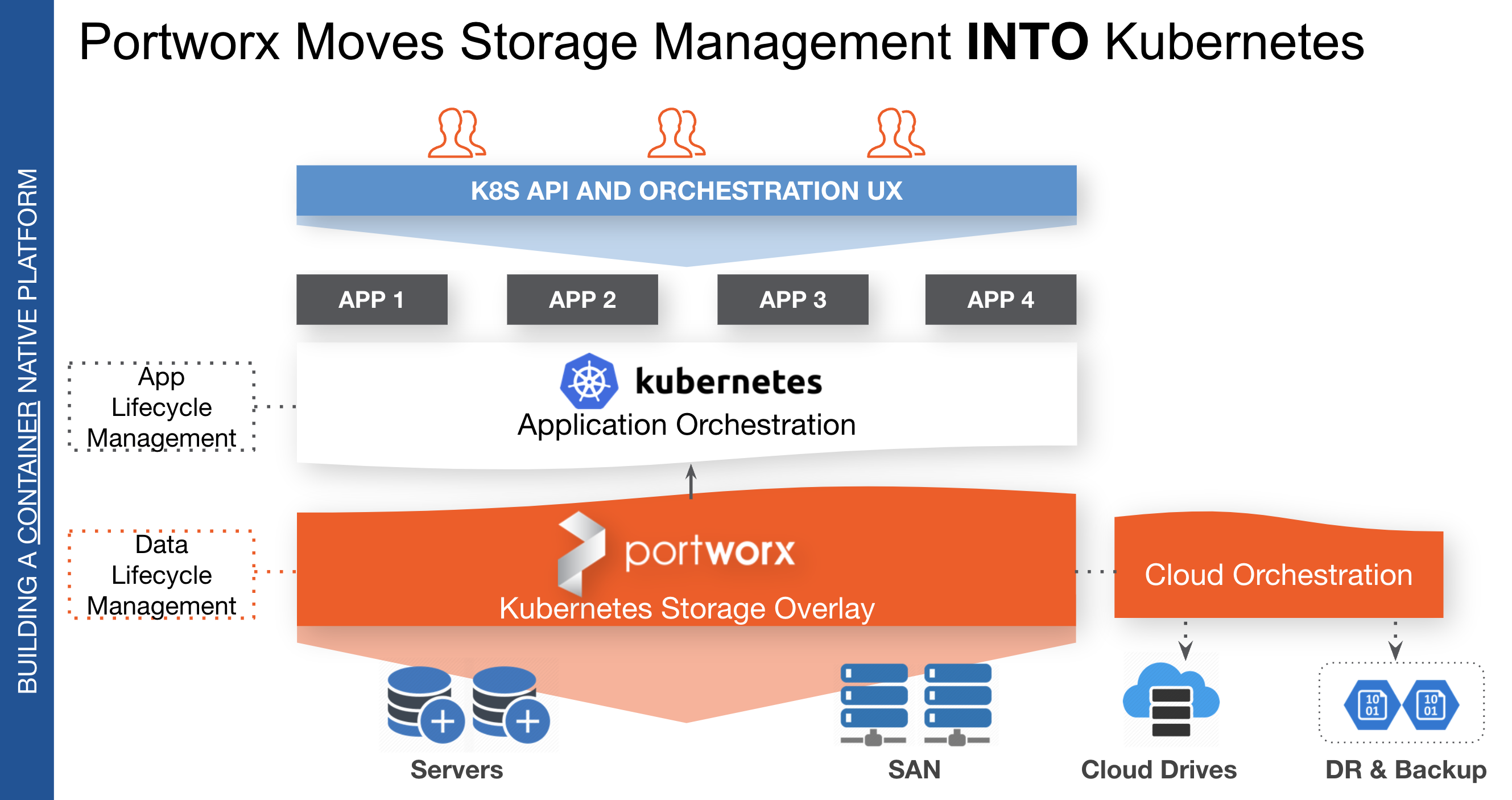 Portworx is a data management platform that serves application pods in Kubernetes clusters. Portworx is deployed natively within Kubernetes and extends the automation capabilities down into the infrastructure to eliminate all the complexities of managing data.

The diagram above shows how Portworx does this:

Portworx Data Services is a database-platform-as-a-service that enables enterprises to expedite deployment, day 2 operations, and protection for heterogeneous databases, without any lock-in or the need to hire specialists. Platform teams and Site Reliability Engineers (SREs) can now use ONE platform for any database to benefit from the single-click deployments—a consistent way to all databases and one vendor for enterprise grade support.

Portworx Backup is a leader in Kubernetes Data Protection, providing the easy button to secure containerized applications anywhere. Portworx Backup is an app-aware and container granular service built to simplify compliance and data protection, providing speedy restores in as little as a single click. Self-service management empowers application owners to back up and restore their apps anywhere in minutes while guaranteeing protection against ransomware with object lock and immutability.

What Is Kubernetes Namespace?

Administrators can create as many Kubernetes namespaces as necessary to isolate workloads or resources and limit access to specific users.

What Are Kubernetes Roles and RoleBinding?

When you start Kubernetes clusters with a small team, managing access control to the resources and namespaces might be a lower priority. As the team grows, we need a system to limit the access to Kubernetes resources to increase security. If you are hosting a cluster for an application development team and developers need access to the cluster, then you definitely need to limit the access to the resources that are dedicated for them.

Role-based access control (RBAC) is a method of regulating access to computer or network resources based on the roles of individual users within your organization. RBAC in Kubernetes infrastructure is implemented through Role, ClusterRole, RoleBinding, and ClusterRoleBinding.

An RBAC Role or ClusterRole contains rules that represent a set of permissions. Permissions are purely additive (there are no “deny” rules). A Role always sets permissions within a particular namespace; when you create a Role, you have to specify the namespace it belongs in.

ClusterRole, by contrast, is a non-namespaced resource. The resources have different names (Role and ClusterRole) because a Kubernetes object always has to be either namespaced or not namespaced; it can’t be both.

ClusterRoles have several uses. You can use a ClusterRole to

Here is an example Role YAML file in the “dev” namespace that can be used to grant read access to pods. We gave this Role  the name of “pod-read-only-role,” as also shown in the diagram above.

ClusterRole and ClusterRoleBindings provide permission to cluster-wide resources. They can be very powerful. You need to be careful with how you apply them because they apply not only to any existing namespaces but also to any future namespaces that you create.

For more information about Kubernetes, visit the link below.

For more information about Portworx products, visit the link below. 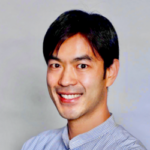