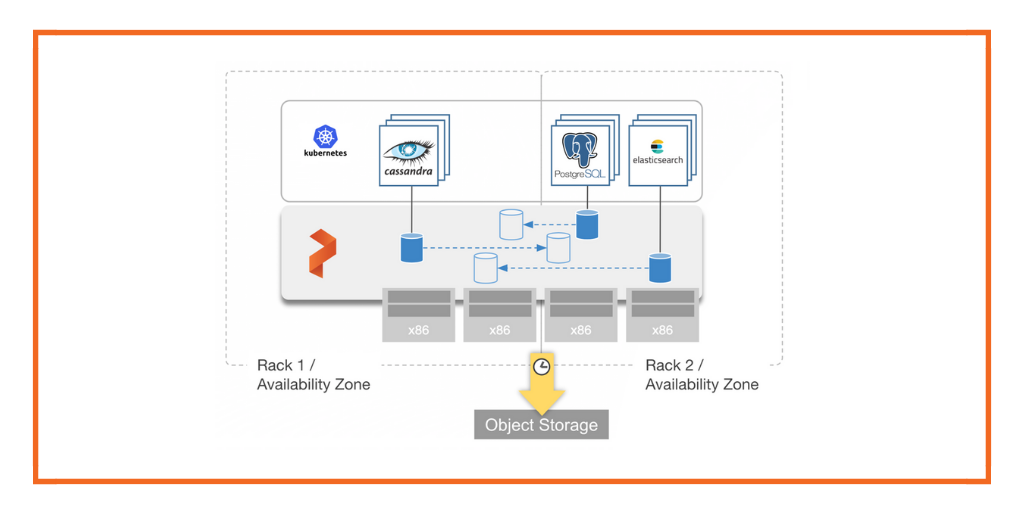 Portworx Kubemotion™ (formally known as PX-Motion), was released in December 2018 as part of Portworx Enterprise 2.0, and has quickly become one of our most popular features. It is not hard to see why. Portworx Kubemotion is the first and only Kubernetes application migration solution that moves application configuration and data in a single command. It is designed to extend the portability of Kubernetes to include stateful workloads such as databases, AI/ML, IoT and big data workloads at the heart of Portworx’s enterprise customer base.

With Kubemotion, Portworx solved the critical problem of data portability by enabling customers to migrate application data and configuration between clusters for Kubernetes to truly enable hybrid- and multi-cloud portability.

This article highlights five scenarios enabled by Portworx Kubemotion that help enterprises get the best out of their Kubernetes-based hybrid and multi-cloud environments.

One of the motivations for moving workloads is to free up resources in the data center to accommodate newer applications. In hybrid environments, it is common for IT to run applications locally when the demand is at its peak, and then move them to the public cloud to release local resources. An employee performance appraisal application is a typical example of such seasonal application that’s only in peak demand during a specific time of the year.

While this process is simple with traditional VM-based workloads, moving Kubernetes applications between clusters is not trivial.

With Kubemotion, customers can move cloud-native applications from one environment to another with full automation. For example, if a bare-metal cluster is becoming a resource bottleneck, and the customer wants to migrate workloads to a different data center or the public cloud where there is scope for growth, this is easily accomplished with Kubemotion.

Kubemotion not only moves the application data but also the entire configuration and associated Kubernetes objects to the target environment. This capability enables customers to free up compute resources by moving less-utilized workloads to a different environment.

Blue-green deployments are often used to reduce downtime and risk by allowing controlled testing of two different production environments labeled as Blue and Green. At any time, only one of the environments is live which serves the production traffic.

Users are invited to use the “green” version of the application to report any UX-related problems. DevOps and SRE teams closely monitor the deployment to find possible issues with the newer version so roll traffic back to the “blue” version if any problems are detected.

While Kubernetes makes it easy to configure blue/green deployments for stateless applications, it doesn’t address the need to apply the same configuration to data-centric, stateful applications.

Through Kubemotion, customers can extend the blue/green deployment technique to stateful applications by simplifying the movement of data and application configuration between two environments.

With Kubemotion, it is also possible to run two different versions of the same stateful application in different clusters configured in a hybrid scenario (on-prem and cloud) to perform blue/green deployments.

It is common for enterprises to mix and match the development, testing, staging, and production environments across on-premises and public cloud. To meet compliance and regulations, some organizations prefer the public cloud for development and testing while targeting on-prem for production. Some customers develop locally and deploy in the cloud to take advantage of the scalability and flexibility of the public cloud.

Even though it is easy to replicate the environment through configuration, keeping the data in sync between dev/test and production is a challenge. The development and test teams should use the same data as the production environment to reduce errors and discrepancies.

Kubemotion provides automation and management for the full lifecycle of copy data – whether it lives on-premises or in the cloud. When the gap between environments is reduced, customers get the benefit of faster time-to-market.

Portworx and Kubemotion are supported in all the environments including Anthos, IBM Cloud Private, VMware Enterprise PKS, Red Hat OpenShift and other distributions of Kubernetes.

Zero-RPO Disaster Recovery allows applications to be recovered from a DR site with zero data loss.

PX-DR, powered by Kubemotion, delivers zero RPO disaster recovery for data centers in a metropolitan area as well as continuous backups across the WAN for an even greater level of protection.

Within a hybrid cloud, PX-DR can be configured to constantly synchronize data and configuration between the on-prem and public cloud environments. It can also be extended to multi-cloud deployments that run in the same region where the latency is within double-digit milliseconds. With PX-DR and Kubemotion, customers can perform a live migration of stateful workloads with almost no downtime.

Interested in solving data mobility issues for your mission-critical applications running on Kubernetes? Request a demo of Kubemotion today and join the growing number of Portworx customers succeeding with their hybrid cloud initiatives.