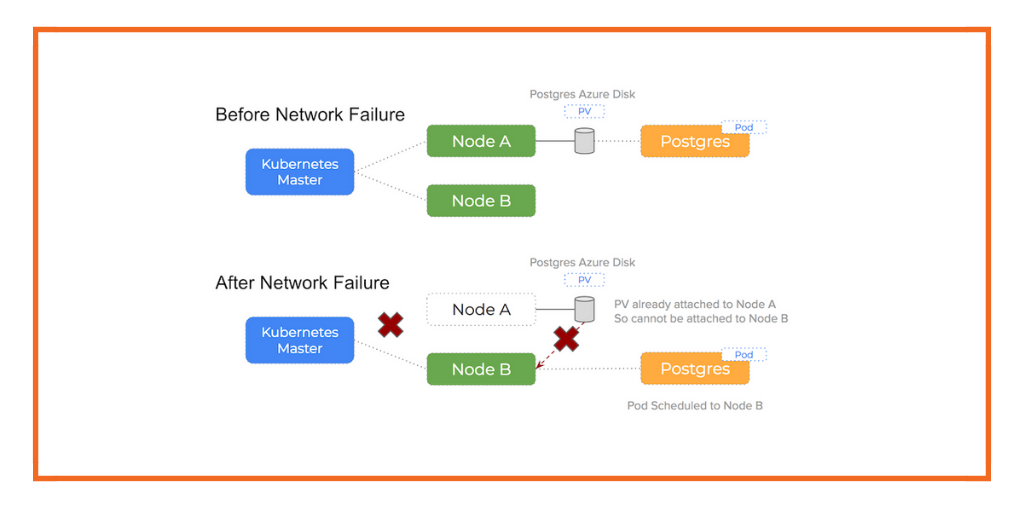 Being the leader in running production stateful services using containers, Portworx have worked with customers running all kinds of apps in production. One of the most frequent errors we see from our customers are Failed Attach Volume and Failed Mount which can occur when using Azure Disk volumes with Kubernetes.

This post zooms in on errors that can happen when either a network partition or underlying hardware failure for a network interface card happens. In this case, the Kubernetes master can no longer assert the health of the node and the pod will be re-scheduled to another node which can result in Failed Attach Volume and Failed Mount warnings.

Networks are notoriously unreliable and there are various failure modes that can affect the health of a cluster. The Split Brain situation is a major source of problems for distributed systems and happens when one part of the network becomes out of communication with another.

At a lower level – a network card failing at the hardware layer or an IP mis-configuration can lead to a one part of the network unable to communicate with another.

The problem with network issues like this when using Azure disks on Kubernetes is that the disk is still attached to an otherwise healthy node but the Kubernetes master is unable to see the node and cannot know it is healthy. This will trigger a re-schedule event that will lead to another pod being scheduled to a healthy node. Now are are in the following situation:

In our tests – we simulate a network failure by adding some evil firewall rules ($ iptables -A DROP) which leads to no traffic able to be sent or received to that node. When this happens, the kubelet is unable to communicate its status back to the Kubernetes master and is thus dropped from the cluster and all its pods are rescheduled to other hosts.

However, when attempting to attach the Azure Disk volume to this new, healthy node, as we have discussed, Azure views the volume as currently attached to the old node and we are essentially trying to attach to two nodes at the same time.

It’s important to know that Kubernetes will not force detach the Azure disk and so we get stalemate. 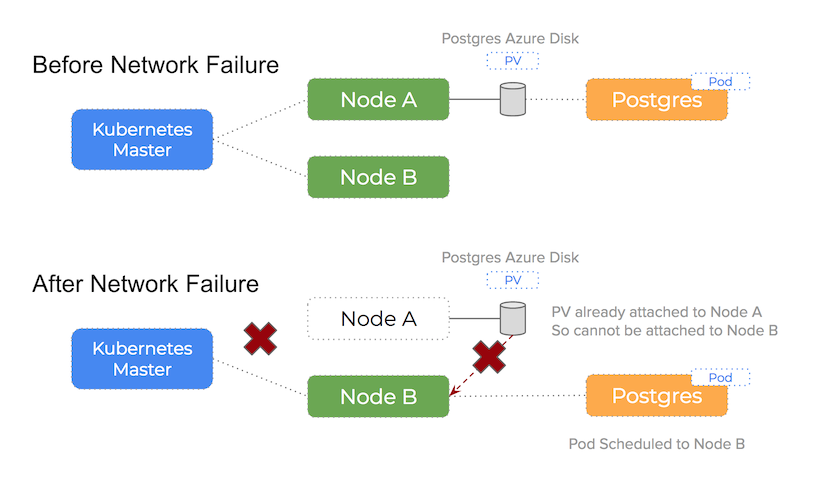 When you see a network partition, you will see the following error output:

This error is a case of does what is says on the tin and captures the overall problem nicely.